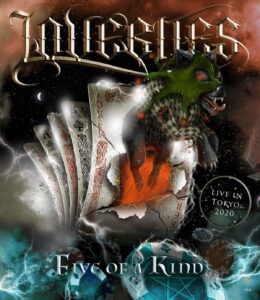 The new live Blu-ray from LOVEBITES is chock full of power/thrash goodness. Recorded at Zepp DiverCity in Tokyo on February 21, 2020, it showcases the band in top form as they support their most recent full-length, Electric Pentagram.

Before I talk about the performances, I would like to mention the audio and video aspect of the Blu-ray. I am particularly pleased with both. I’d love to hear a little more of Miho’s bass, but that’s just a personal preference. In reality, the mix is just about perfect. The editing is superb. No hyperactive, migraine-inducing cuts. Every performer gets plenty of screen time and the various solos and highlights receive just the right amount of focus. Short of being there in person, this is the definitive live LOVEBITES experience.

So, how is the concert? In short, excellent. These ladies are on fire. In three short years, this band has released three full albums and two EPs, and there hasn’t been a single bad song in the bunch. They just keep getting better — and they started out excellent.

There is a lot of attention — and deservedly so — on the guitar duo of Midori and Miyako. There’s no question that they are fantastic. World class. Next level. Superb. Every synonym for “awesome” that you can think of and then some. And it still wouldn’t be hyperbole. They play off each other as if they’ve been doing so all their lives. Watching them perform, they couldn’t be more different. Midori is a bundle of energy, with every note and riff visible on her face. Miyako is cool and collected, standing mostly still while her hands move at unreal speeds. And yet, their chemistry is undeniable, and their solos are consistently some of the best I’ve heard in years.

The amazing guitar work, however, is just part of the picture. Have you ever listened to a band where amazing guitar work seems out of place? Like it belongs to a different, and better, band? For guitar fireworks to really work, they need a rock solid foundation. And that’s where Miho and Haruna come in. They are the unstoppable freight train that powers the whole thing and keeps it all moving forward at breakneck speed. They create the framework that allows Midori and Miyako to shine as they do. They are one of the best rhythm sections right now. Not just in Japan. Not just in “girl bands.” Not just in metal. In the world. Regardless of genre, gender, or geography, they are every bit as spectacular as the guitar goddesses they share the stage with.

And the final piece of the puzzle — the final point of the Electric Pentagram — is Asami. In their early performances, not only was she new to metal, she was new to being out front at all. There were times when she seemed a little nervous (and understandably so). No longer. She is relaxed and at home and absolutely owns that stage for the entire 105 minutes of the concert. It takes a special vocalist to sing over these amazing instrumentalists and not be drowned out. Her voice drives it all home with power and charisma to spare. And during “Dancing with the Devil,” she even gets a chance to show off her R&B background, making that song a personal highlight.

It would be easy — and wrong — to write LOVEBITES off as a gimmick. “Cute girls playing metal.” Don’t fall for that lie. They are not a flash in the pan. LOVEBITES can stand toe to toe with any metal band on the planet and hold their own. They have the chops and, most importantly, the songwriting ability to mark them as an elite tier band.

They are the real deal.

They are LOVEBITES, and they play HEAVY METAL!!