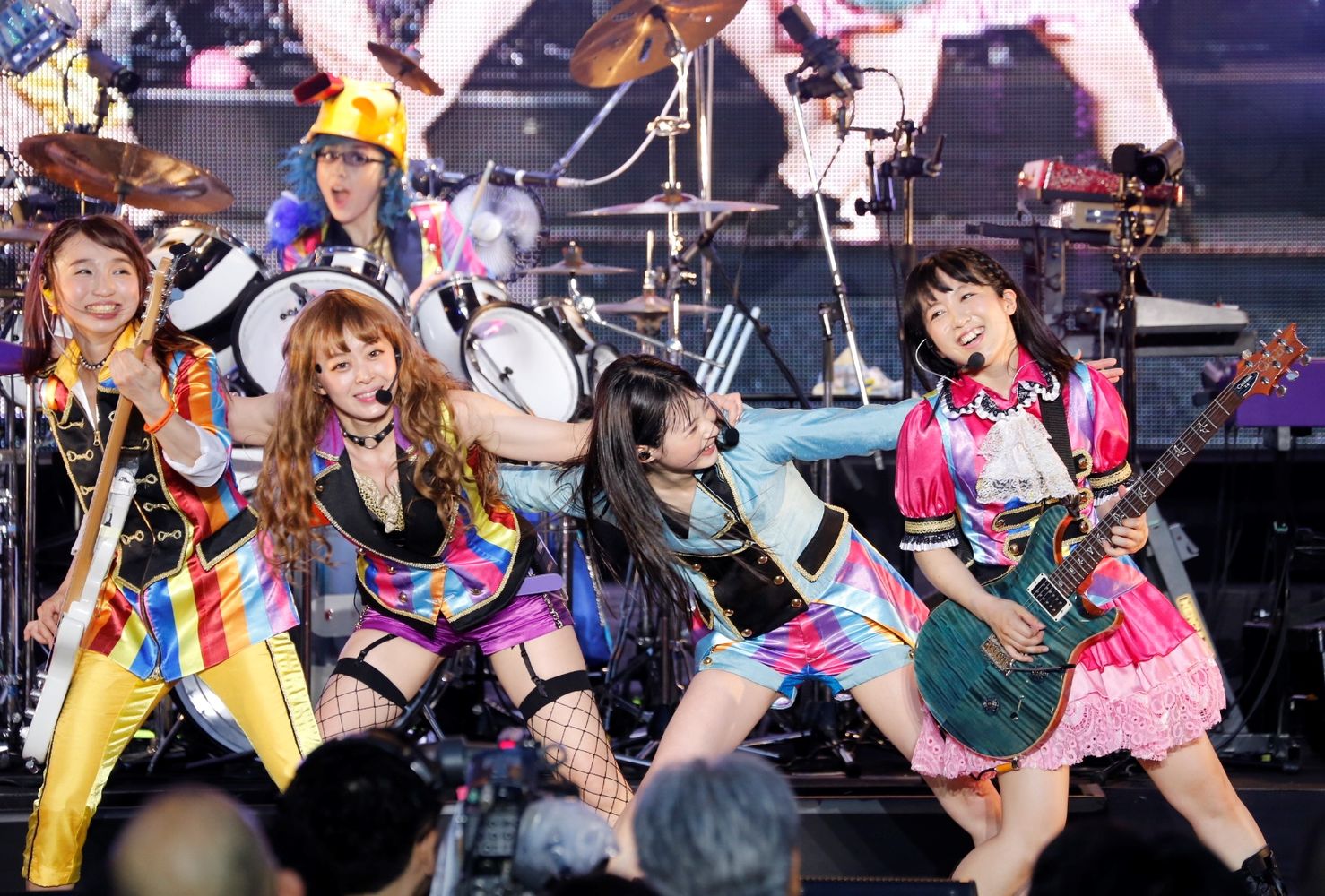 “Each member is progressing and evolving”, “Yaon is everything at this moment”. Statements made by Gacharic Spin’s F Chopper KOGA during an interview earlier this year. That certainly was evident when Gacharic Spin thrilled the attendees for two and a half hours at their very first solo performance at Hibiya Yaon Saturday evening. Despite it being Japan’s rainy season, the band and their fans were blessed with clear skies. The band opened the show with the energetic and fan inspired “Go! Liver”. After this first number came the first surprise of the evening. As the band started into their second song in the set, “Bomber Girl”, two other performers joined Mai on stage. It was revealed that these two performers, Misaki and Achu, are part of a new troupe named Gachadan Junior, consisting of 14 members in total. This group would be supporting Gacharic Spin on various songs though the evening.

Gacharic Spin, known for their stage theatrics and constant motion, made full use of Yaon’s large stage. Three large monitors were at the back of the stage to provide special effects and to also provide close ups of the various things happening during the performance. Each member wore a bright multicolored costume (with the exception of TOMO-ZO being in full pink) fashioned similar to a marching band. Between the costume design, all the different action happening on stage, and each monitor showing different aspects of it, I felt like I was at a musical three ring circus and the band members were the ring leaders. 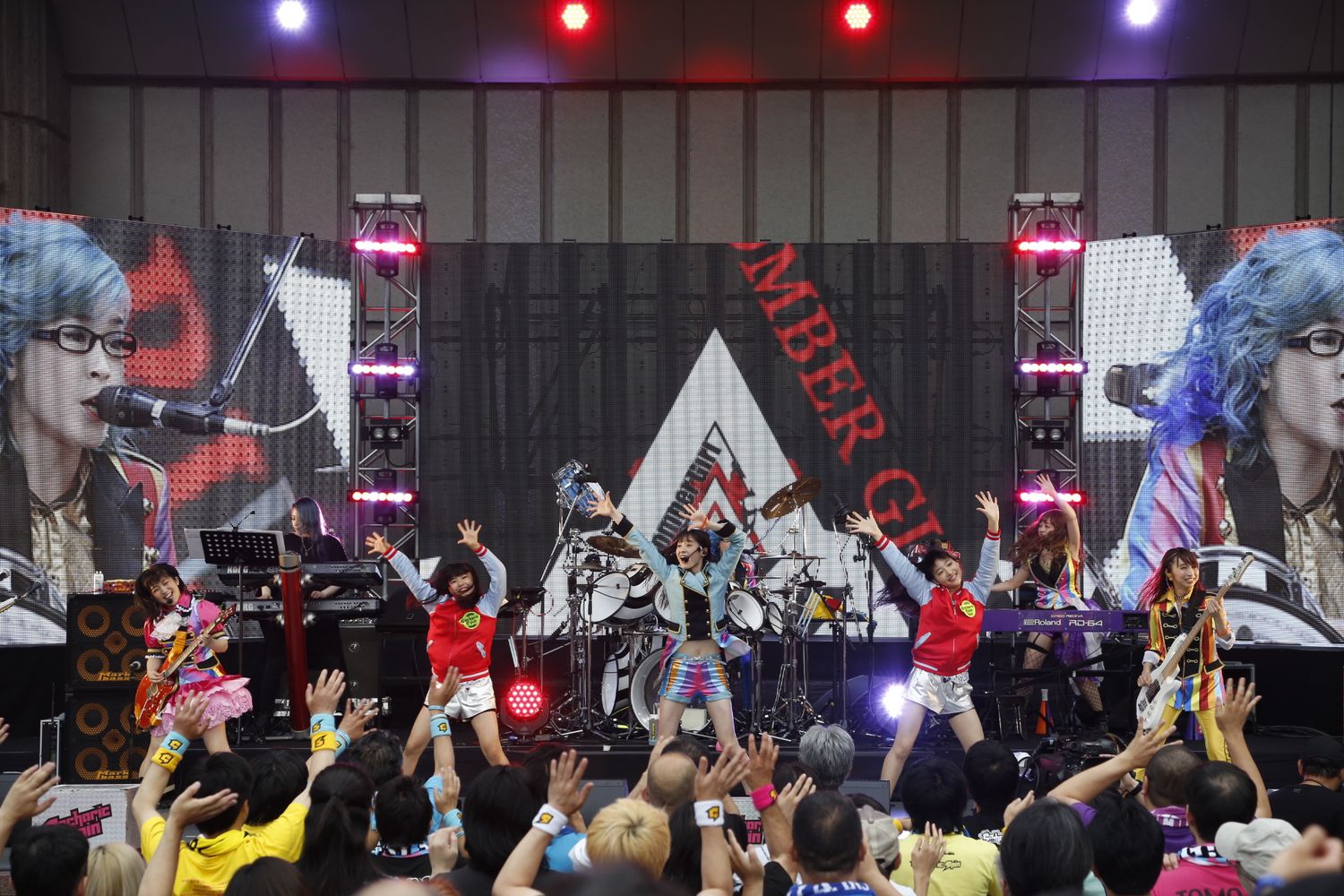 After the first five songs in the set, concluding with Oreo joining Mai on vocals for “Tokenai Candy”, the band moved to a small platform located in the center of the venue to perform re-worked acoustic versions of “Imawoikiteru” and “Yugenjikou”.

With the next two songs that followed, the audience was able to see and enjoy Hana’s skills away from the drum kit. It was a thrill seeing Hana play guitar on “Boku Dake no Cinderella”, but the real surprise was her performance during “Parariya Happi”. While Mai played percussion, Hana took over performer duties in addition to singing. Her dance moves were absolutely amazing, having some definite influences from Prince and Michael Jackson.

The first special guest of the evening then came to the stage: Prince Tiara, who would have the role of lead vocalist for Metallic Spin. The band kicked things off with a cover of Van Halen’s “JUMP”, with Tiara doing his best David Lee Roth impression. Unfortunately this rendition was short lived as Tiara had a ‘wardrobe malfunction’ with his pink spandex tights! This gag went over extremely well with the crowd. Undaunted, the band fixed this problem with a make shift ‘butt flap’ and pressed onward with a cover of Ozzy Osbourne’s “Bark at the Moon”. The cover of this song brought a huge smile to my face, especially seeing TOMO-ZO in ‘pink pretty alien’ mode shredding flawlessly.

As dusk set in the band members and audience donned their neon gloves as the intro music for “JUICY BEATS” began to play. Mai sang the fist verse of the song which was an unexpected and awesome surprise. “Kakuhen” followed, sustaining the crowds excitement which hadn’t subsided since the start of the event. Special guest Fuki then came to the stage, and the excitement of the venue went up another notch. 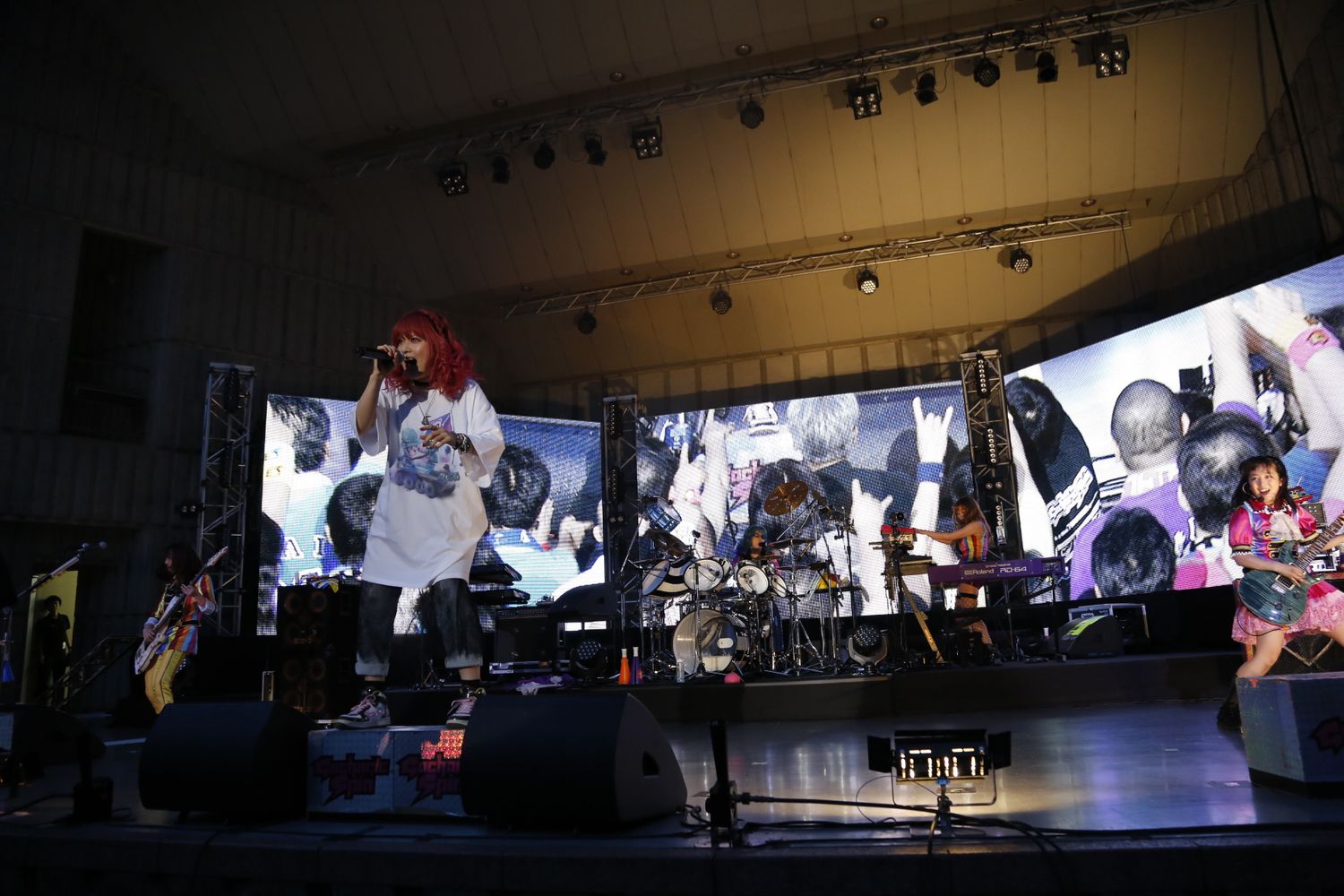 A crescendo filled Yaon as the band began to play DOLL$BOXX’s “Take My Chance”. As an additional treat and surprise DOLL$BOXX then debuted a new song “Shout Down” – a very hard rocking song which features the same signature vocal dynamics between Fuki and Hana as their past works. Fans will be very pleased. Afterwards Fuki announced that a mini EP from DOLL$BOXX would be coming in the fall.

After Fuki left the stage the band did not let up, keeping the energy level high down the final stretch. A string of crowd favorites followed one after the other: “Sekira Liar”, “Hunting Summer”, “Lock On!!”, culminating with “Dangan Beat”. Some highlights in this stretch included Misaki and Achu joining Mai for triple head twirling during “Sekira Liar”, Mai and Oreo playing keyboards off of each other’s backs, the audience waving orange light sticks for recovering member Nenne, and the entire Gachadan Junior troupe leading the towel waving during “Dangan Beat”. 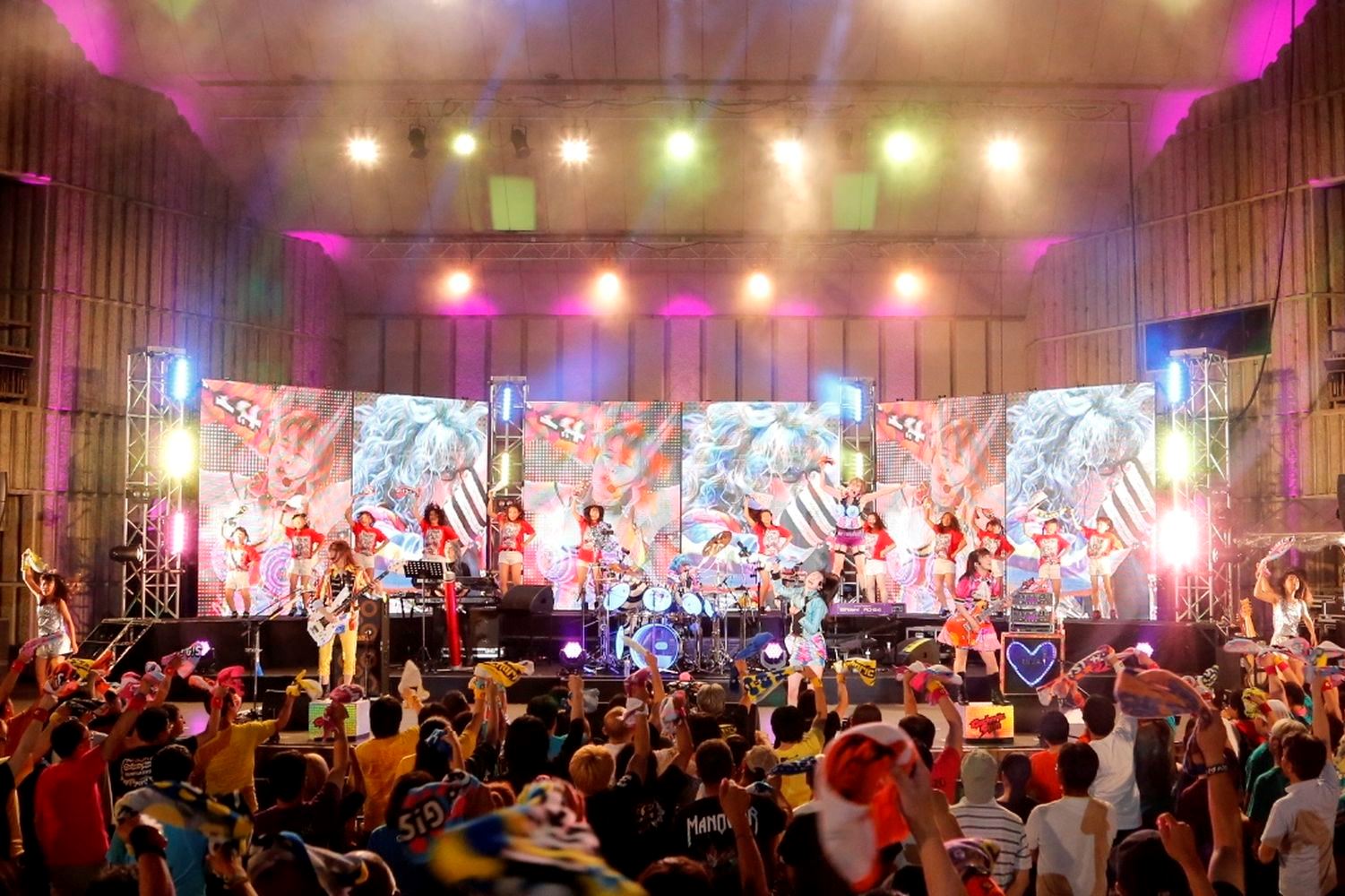 When the band returned to the stage for their first encore, KOGA told the audience “the best funk song is complete”, and with that they launched into their new song “Generation Gap”, which does indeed ooze with 70’s funk. The performance of the song included a dance battle between Mai and Oreo which was quite entertaining. It was announced that the single is slated to release on September 6th.

The band then played “Go! Liver” once again, with KOGA making a very moving and emotional speech during the song. The show was then closed out with “WINNER”, it was something seeing all of Yaon running in place for this number, feeding off the band’s energy and vice versa.

There were many other highlights that I would like to mention but will leave them as a surprise for fans to see for themselves when the concert is released on video. I really hope that Victor Entertainment gives this concert the type of release it deserves: high definition bluray and in its entirety.

This was the 6th time that I have had the privilege to see Gacharic Spin live. Each time I have seen them raise the bar a little. At Yaon they shattered it. I can’t wait to see what they do next. 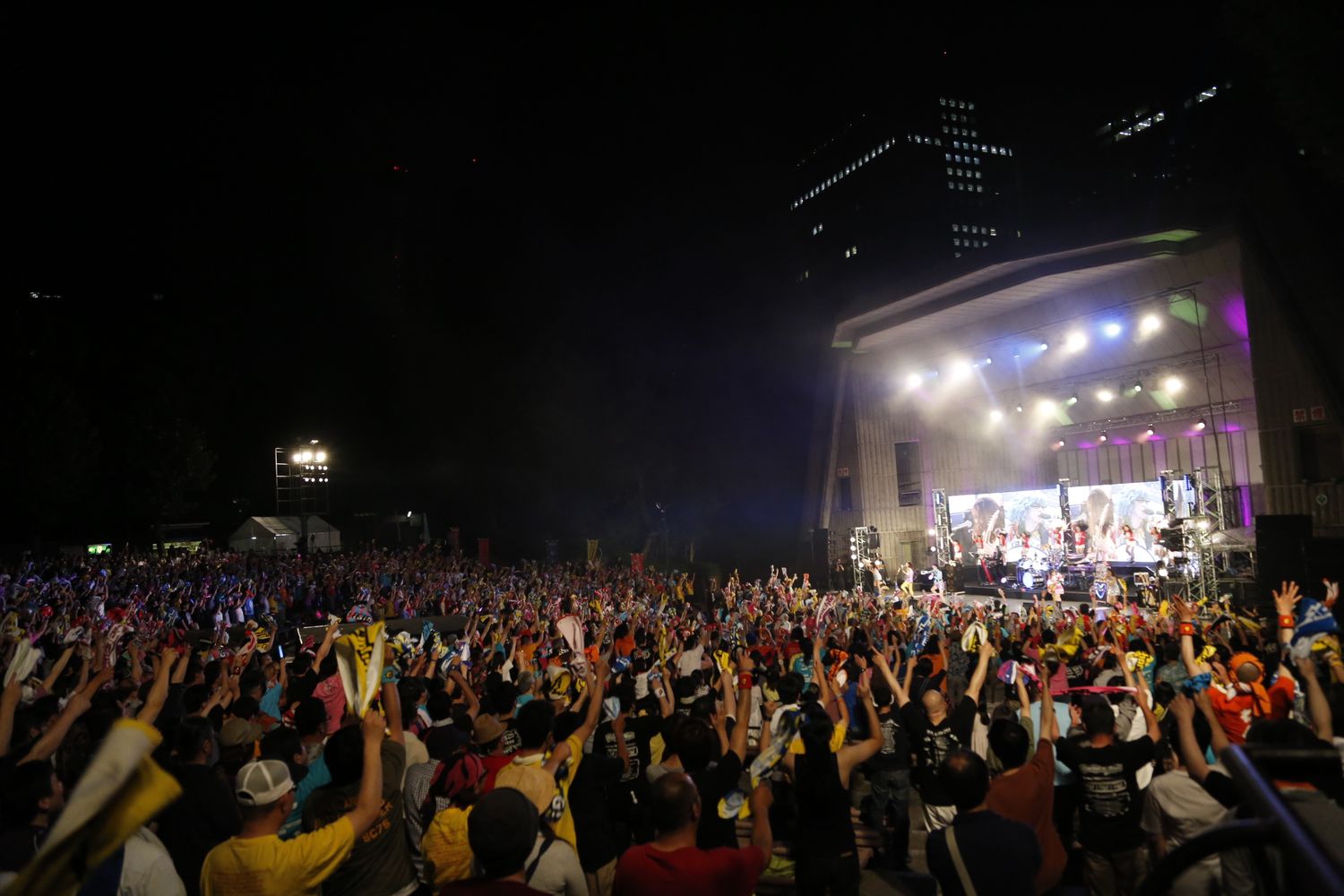